Black Surge is an fictional cloud conference that will take place in 23 different cities around the world in which the free circulation of information is being compromised. Each contributing city has invited a designer to make an encrypted visual identity to promote Black Surge locally. My city is Chisinau in Moldova, where poverty (80%), unemployment (30%), and political instability between the violent Communist party and the European Union orientated Democratic party are daily practise. Some 25% of all employees go to Western Europe for seasonal jobs, as there are far too little jobs available in Moldova. My Black Surge poster is encrypted in a joblistings poster and targets the Moldovan migrant workers searching for a better life in Europe. Opportunity is the company I created for my Encrypted Identity. It provides the two greatest scarcities for the Moldovan inhabitants: jobs and work visa. The main colour is yellow, a bright colour that will stand out on the streets of Chisinau. The job listings I made are also very colourful to attract the attention of bypassers. In order to get the invite with which the poster can be decoded, the Moldovan citizens will have to send an email to jobs.workvisa@opportunity.com. The invitation in the shape of a visa will be sent back to them, in a small Opportunity booklet. 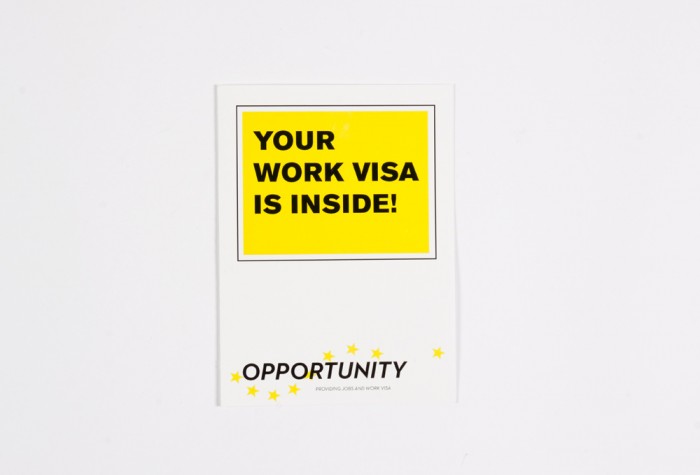